Leave your bicycle helmet at home for cycling in Portugal, or not

Portugal. Finally! A break, a change, fresh air after a long time cycling through Spanish lands.

Spain has diversity and sharp contrast between regions, but crossing the border to a new country, different language and unknown traditions are always welcome. Even when the differences are small like in this case.

It might sound funny coming from a Spaniard, but after traveling around most of Europe and putting my feet on around 40 countries; I had never gone before to the neighbor one! I had never been in Portugal before. It was time!

Helmet is not mandatory for cyclists

Oh yeah! I am not going to lie to you, the main reason for going to Portugal as soon as possible was to be able to get rid of my bicycle helmet and use a hat. The heat was killing me in the early summer and being so many hours under the bright sun was a penitence.

I was extremely happy of being able to use my hat without having to worry about police, tickets and other bullshit. Yeah, it is safer, kind of; but I prefer to avoid skin cancer since it is a more likely problem when riding so many hours under that sun, and so slow.

Cycling through empty roads on the mountains of Portugal 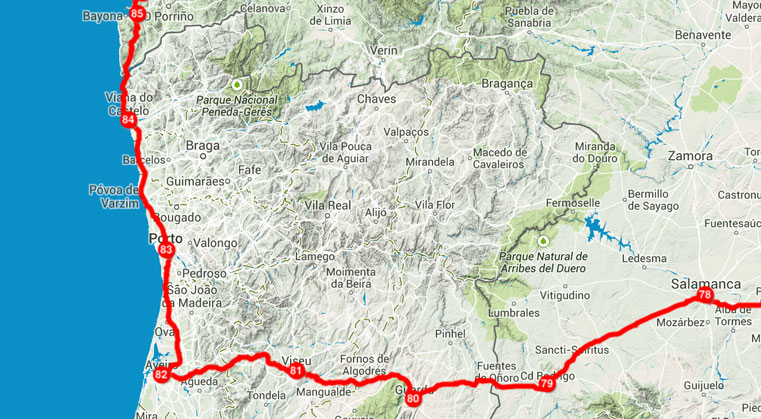 Lovely roads going up and down the mountains and hills, with barbecue areas next to it and barely no cars to share the tarmac with. Good thing considering the tarmac wasn’t at its best.

After a couple of nights wild camping we arrived at Guarda, where we were meeting with a Couchsurfing host. Guarda is the highest town of Portugal, and it is settled over a hill. The highest point of the town is the church square.

Pushing a few extra hundreds of meters climb wasn’t such a big deal anyways, but probably funnier with a lighter bike. Anyways, it felt like Guarda was not a very friendly cyclist town. We barely show anybody else with bicycles. It is a very lively city, with quite a lot of artists and museums.

Up and down to Viseu

After one-day wild camping, again, we arrived at another Couchsurfing host. A Polish-Irish couple who was staying in the awarded as best Portuguese town to live in.

We had a great time staying with them and we share multiple chats and dinners, and we even make an attempt to go out for a beer. But the everywhere-smoking bars were too much for us.

We made it to Aveiro following a cycling path for a while and riding between mountains and next to some river. We got there sweaty and tired! But we had a great time with another couple, this time from Warmshowers.

Aveiro was the most touristic town we had ever been in Portugal, but it didn’t feel that bad once you are staying there with friends and not in the central areas. They just tried to rent us a boat a couple of times.

Cycling into Porto during a football match

Porto has something special. It has a charm, a particular beauty. It is not especially nice under normal standards. It is not well preserved, it is a bit in ruins, it is dirty, it is chaotic… But all that makes it real, and all the colors and smiles give its own charm.

It was fun to arrive at Porto when Lisboa football team was playing a final against Sevilla. The fun was watching to all the Portuguese, from Porto, supporting the Spanish team instead of their own. Making jokes and laughing at their neighbors.

I always thought that rivalry between Barcelona and Madrid was too much, but this was a completely superior level of hatred.

A couple of days in the Portuguese coast, wild camping, sunbathing and enjoying the sea was enough. We had had a great time cycling through Portugal and it was time to keep cycling, this time around the Spanish brothers of the Portuguese people: the Galicians.